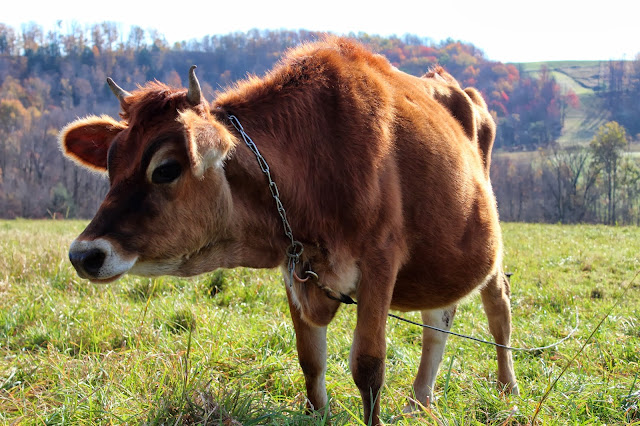 This post may alarm you.  It may gross you out.  It will probably leave you feeling a bit squirmy.  It does me, anyway.  Feel free to skip it entirely, unless watching a cow get impregnated fascinates you.

Because that is what Penny did over the weekend:  Get pregnant.  (At least SOMEONE around here is.) 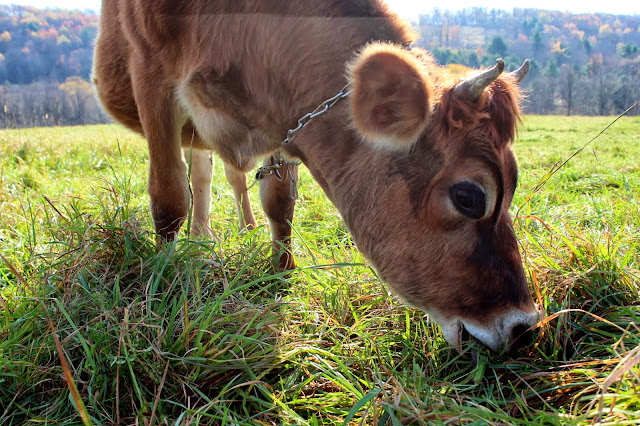 Or, at least, that was the idea.  We'll see if it "took" in about 20 days.  If she hollers and bellows for some male to come and make babies with her, then we will know it didn't work.  If she stands quietly and contentedly, growing a baby bovine during her next 'heat cycle', well then CHA-CHING.  It took! 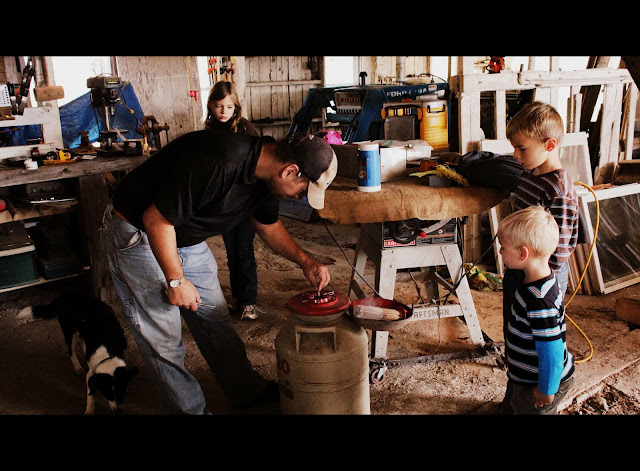 We chose to buy some bull spermies in a nice, tidy little straw instead of using an actual bull.  We did this because Matt loves me and knows that I am so NOT CAPABLE of having a bull around here.  No thank you.  If a bull comes to Hopestead- I will go.  That's final. The end.  Over and out. 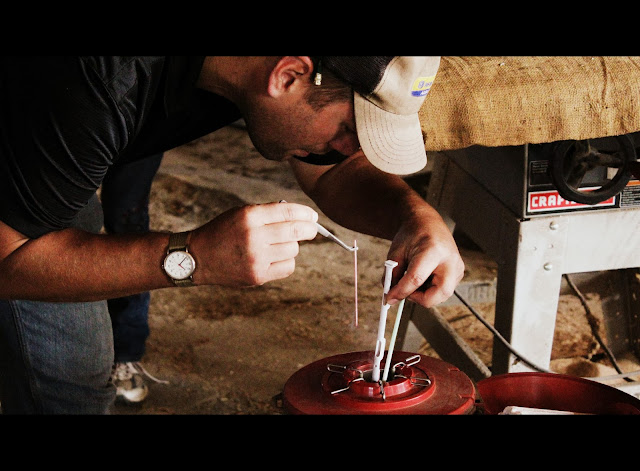 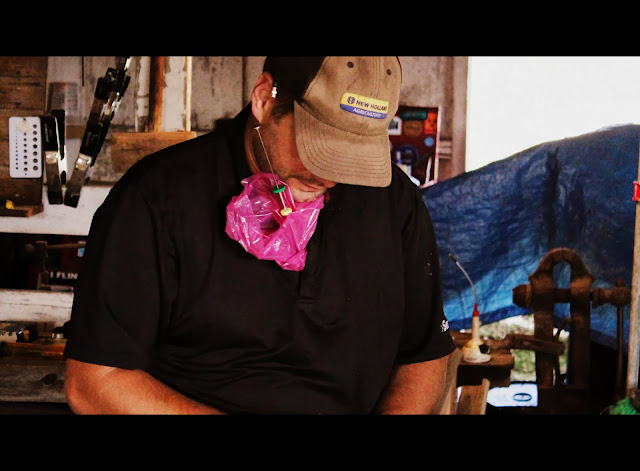 He sticks the intimidatingly long spermy-shooter in his shirt.  Spermies, they like it warm.

(Wow.  Never thought I would use the "s" word on my blog.  And here I am, shooting it off like bullets.) 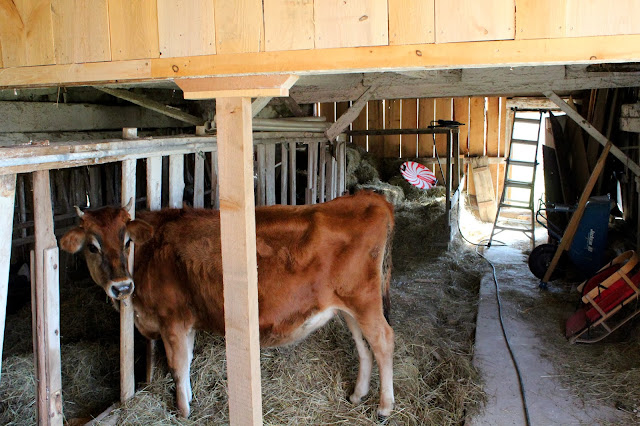 Meanwhile, on the other side of the barn...the innocent and unsuspecting Penny wonders why she was put in the barn on such a glorious day.  "Odd" she thinks to herself.

But she doesn't know the meaning of the word ODD just yet. 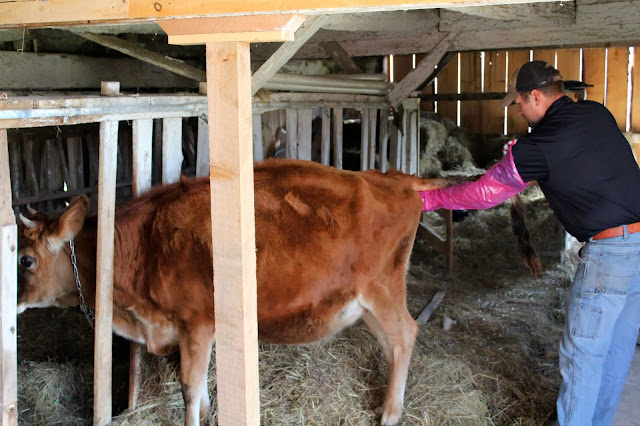 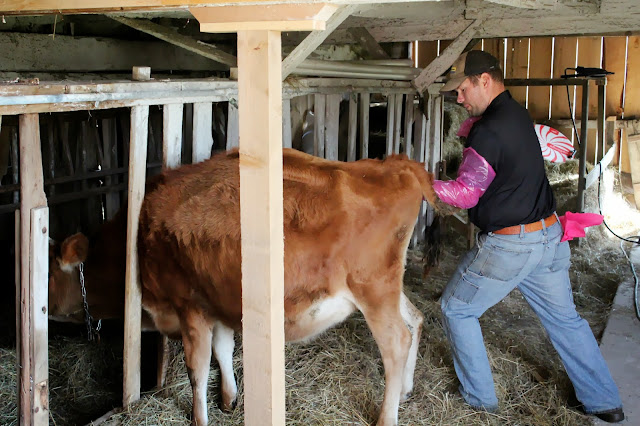 Oh yes.  This is happening. 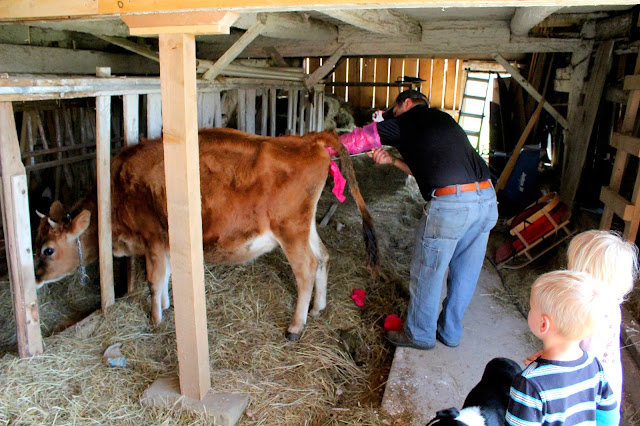 Matt has done this many times before- in fact, he's been known to quadruple pregnancy rates on the farms where he has worked. 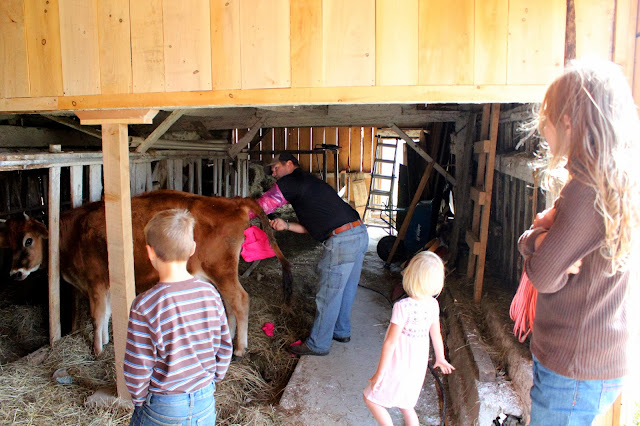 I don't think Penny minded the actual procedure, but she may have minded all the spectators gawking at her while she was most vulnerable.

The whole thing took like five minutes.  Penny was fine and dandy afterwards.  I, on the other hand, waddled back to the house with knees glued together, wondering at the indecency I had just witnessed.

We put Penny out to pasture.  After all, she may be eating for two... 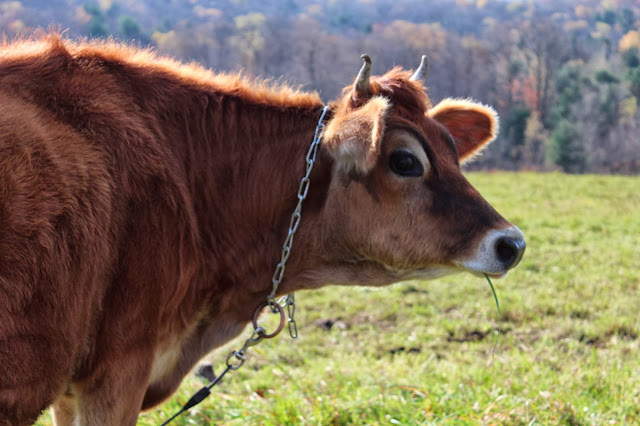 Later, I found that Penny's brave feat had made the papers! 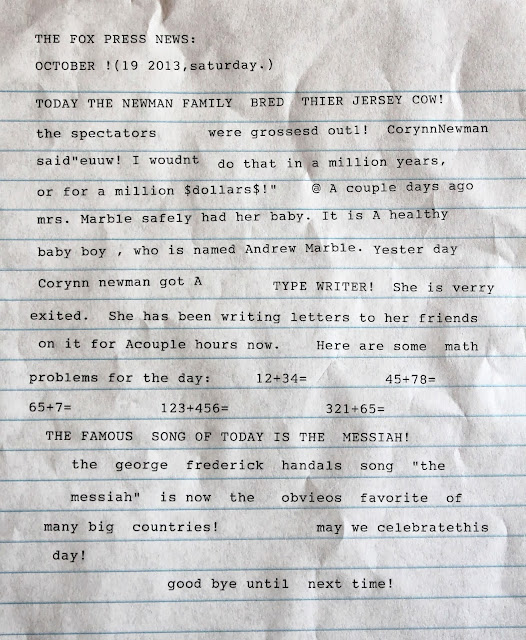 (My apologies to the Marble family.  The journalists' priorities, is seems, were more than a bit skewwed.)  ;-)
Posted by Rebecca at Wednesday, October 23, 2013

OMGoodness..Is it horrid that I wasn't sure whether to finish reading and watching your blog post for photos or maybe I ought not to...And reading about the "s" word, I felt naughty ;) LOL! But I Did..It was def. a little weird ;) But I do HOPE that Penny is eating for two or three or four now! :)

Oh my word, that made me laugh out loud!!!!! Too funny. I remember being traumatized for quite a while watching a stallion impregnate a mare on the farm when I was about 12. lol

too funny! I love the "article" at the end.

Ok, I will ask it. How did you explain this to the little ones?

Phew! I'm thankful the clarification that your husband is trained and received an income from doing this before. Because before that I was thinking all about how I didn't know DIY AI was a possibility and my reading about new and prospective DIY homesteading is usually how Bill gets into trouble. Maybe it should be him breathing a sigh of relief! Does Matt confirm the pregnancy too? Looking forward to the results of Penny's pregnancy test!

I laughed out loud at your title, "Penny's Big Day." Perfect. I love it. Haha!

All I can say is you married a real treasure! What can't he do? And looking handsome the whole time, too! I think the funniest part of the photos was the look in Penny's eyes in every one of them: startled and uncertain.

Oh my goodness. This is hilarious. I seriously cracked up! I hope it is a success for you all. Oh and the "at least someone around here is" reminded me how much we think alike. ;)

neato! and great October photos! Matt is really savvy about farming--I like the way the hay will dry out because of the way he allowed the air to go through the boards up top.

That is fantastic!!! I never thought I'd say it, but that is one skill I wish my hubby had!!! I was hoping you'd link to instructions on 'how to', but then was rather relieved that Matt is actually trained in AI ( could you imagine the poor cows having a newbie doing it??). I wish you a wonderful calf in 9 months & loads of milk (we are currently milking our 2 housecows & having so much fun playing with all the milk)! We have to send our cows out to the bull because like you I am adamant that we won't have a bull on our place! It's a juggling act as to when & how to get them there etc. AI is so much easier ( if only we knew someone around who could do it!) Have fun watching your Penny ~ they get so placid & dopey when they are prego!
Blessings
Renata:)

Love it that she included baby Andrew. I can so relate to Penny's thoughts and feelings, lol!! :)

Elizabeth- I'm hoping for just one. One is PLENTY. :-) After all, I could give or take the calf- I just want the milk!

Rebecca- farm kids get a pretty early understanding of the facts of life. Andrew is the one totally enamored by it all. He has a book (several in fact) that shows a calf being born step by step. The boy has it memorized. He had me explain what ovaries are for the other day. Sheesh.

Quinn And Renata- yeah, he is pretty handy to have around. The way he explained it all made me realize just how techinal a job it is...not a good DIY deal, to be sure. Matt will give Penny a bloodtest to preg check her in about 30 days. Renata- I'll be calling on you for advice when we are swimming in milk, kay?!?

Anna- you maybe kinda made Matties' day with your comment!

Miranda- why am I not surprised?

Michael- thanks for your comment! It was nice to hear from you!

Michelle- Little Andrew is famous over here too. Praying he gets to go home soon!

I just have to say... I am jealous of your cow adventures. I'm so longing to have a sweet little jersey here, but as of yet my husband hasn't embraced the who self-sustainability idea. Perhaps in time... sigh. Someday... BTW epic name for your bovine. I've had a chicken AND a horse named Penny!

AHAHAHAHAHHAHAHAHAHAHAHA! This made me laugh sooo hard...especially the part about you waddling back to the house with your knees shut tight...you are SO funny. LOVE CORYNN'S LETTER. Oh.my.word. *wipes tears from my eyes*