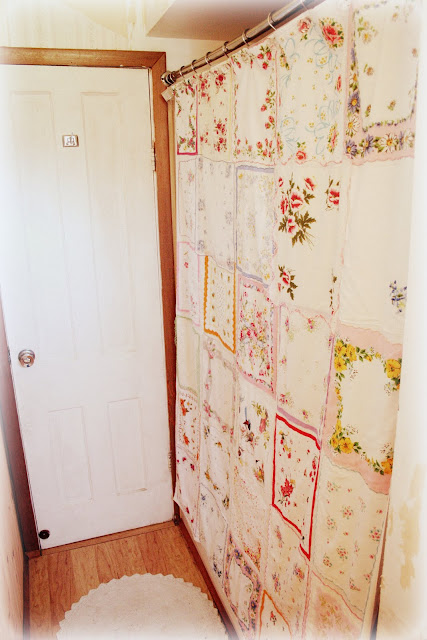 It all began with a package in the mail from a blogging buddy with a note that said "Thought you might be able to use these for something..."

Sure, I had accumulated pretty hankies before that....but with that little note, my bit of happenstance became an all-out hankie hunt. It was quite the little stack of lovely. And that is when the hankie bug bit me. And I have been on the hunt for pretty hankies ever since. 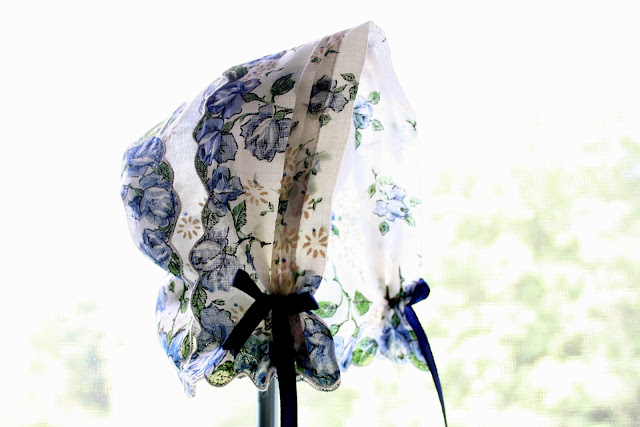 I have used them to make bonnets. 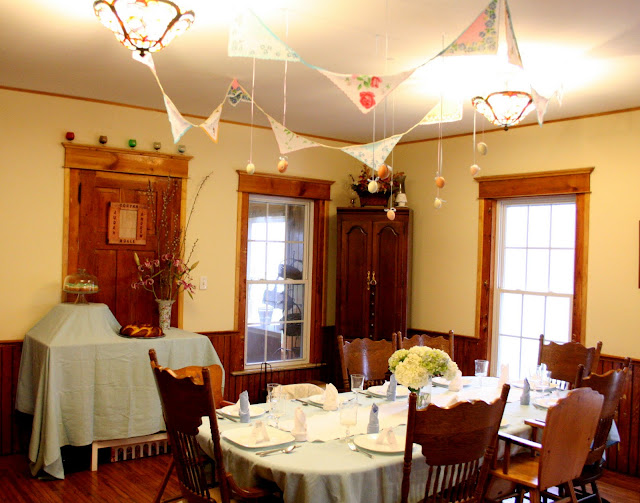 I have used them to make Springy Easter buntings.

And now, I have sadly used them UP to make a hanky shower curtain. 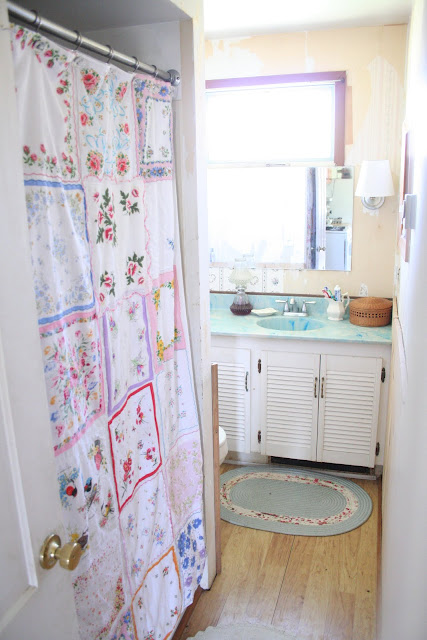 (Someday when the thought of wallpapering doesn't make me sweat and hide in the corner, I will wallpaper this bathroom. Maybe.)
I thought originally of doing it quilt-like (stitching them all together in a sort of patchwork) but decided against it because, it turns out, hankies are very irregular little things and I didn't want to cockeye (or worse, lose!) the design. Plus, many of the edges would have been sad to cut off as lovely as they were.

Instead, I sewed them onto a sheet in a grid-like pattern. I used an old flat sheet cut down the middle and stitched to size which saved me hemming all the sides! I used the buttonhole attachment to whip out 12 buttonholes for the show curtain rings and found out how fun it is just to zoom through a bunch of buttonholes without worrying about sewing on buttons later! 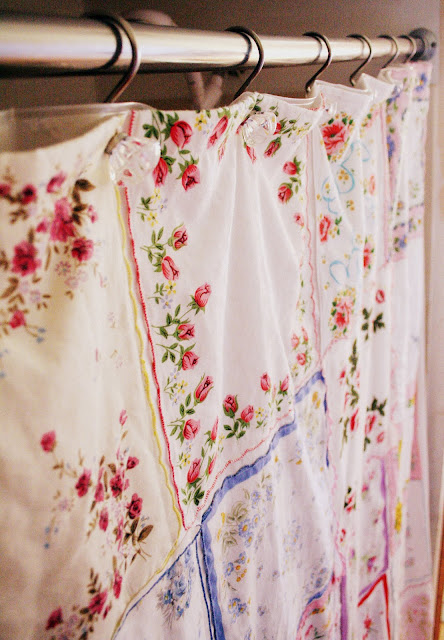 Well, now I have not a hankie left and that makes me more than a wee bit sad. But it is awful nice to see them every time I step into the bathroom. It makes me happy. (I try to concentrate on the shower curtain and NOT the wallpaper!)

And besides, an empty handkerchief stash can only mean one thing: it is time to go hankie hunting!

It looks like this bug can't be squished.
Posted by Rebecca at Wednesday, April 04, 2012

LOVE IT! It looks fantastic, and ties the robins egg blue sink top, and shutter style cabinets all together into one sweet cottage-y feel! Really cute! I think I have one white eyelet edged valance floating around, if you are thinking of a window curtain. If I can find it and you want it, it's yours.

I'm going to keep coming back and looking at this today, it makes me so happy : )

P.S. My vote is to paint the bathroom. Wall paper ain't my thang.

I have plenty of valances lying around here too but I worry that the teeny light source will be too covered. I was thinking about hanging the hanky bunting up as a sort of valance.

And Bonnie~ I am right there with you on the wallpaper thing. I HATE IT. LOATHE IT. DESPISE IT. But the wallpaper that is in there is torn off in places and not in others and the wall is just a mess. If I were to paint it, you would still see the mess. So I bought paintable wallpaper in order to cover up the nastiness. Then I will paint it.

(And thanks for saying about the nasty gross sink looking sorta nice with the shower curtain. I hate that colored sink so much and this was my one attempt to make it more...tolerable.

How is this... i DID NOT NOTICE the lack of wall paper but saw the new curtain, the blue sink the blue carpet (thing) and the Light Pouring in and thought my what a adorable country bathroom.... and you answered my painting question ^^ there : ) thanks!
Progress! Love it!
-Bobbi : )

I love the rug so much!! Where did you get it?

Also-I have a house built in 1904. One trick I use is to peel the wallpaper down so the wall is somewhat flat. Then I thinly coat it with drywall mud and make a texture pattern with a trowel. I have to add many coats sometimes and let them dry in between. Then just paint. It looks great and hasn’t cracked or flaked off in 12 years. I also found some exterior concrete compound. It’s a gray cement like substance used to waterproof the exterior concrete on a house. It looks like concrete and when primed and painted it looks BEAUTIFUL!! I have used that one too. That is more spendy, it was $25 a tub and I used 2 on our very large bathroom.

It's absolutely beautiful! What a lovely bathroom. Yes, you simply must go hanky hunting, now! :)

Perfect! I think you SHOULD use the bunting on the window. And I think I'd try what alltheposts recommends with the walls. I fear your new wallpaper might look bumpy with the old underneath.

It's beautiful! Did you know that you can "wallpaper" with fabric and liquid starch? When you are done it comes right off! I've done it and love it!

I love the bonnet best, but the shower curtain is adorable. Why not two-tone paint it with the second color bag painted. You can wash it. You don't ever have to tear it off. Just a thought. Amazing job!

You are awesome!!!
And obviously whoever sent you those knows where to invest her hankies! Smart woman. ;)

I've looked longingly at piles of those little hankies in my local second hand shops, but I never knew what I would do with them. Now I know! Thanks so much for the idea and great pictures. Beautiful!

be still my heart...

It's the most beautiful country farmhouse bathroom I've evah seen.

IN LOVE with the shower curtain.

I have a stash also.
Started it after my g grandmother passed away and I found a box of hankies. I've been saving them too. Thinking to myself one day, just one day I will make something out of them. This my friend is a genius idea.

And honest to goodness, I never noticed your wall until you mentioned it.

I agree with Bonnie iin that the sweet little blue sink and of course that curtain takes away from anything else.

alltheposts~ sorry I forgot to answer you the first time! That rug was $6.00 at a place called The Christmas Tree Shoppe. Unlike its name, it is a year round store filled with all sorts of neat (and pretty), yet mostly inexpensive things.

I Love EVERYTHING you did with those hankies! You are so creative (although I knew that a long time ago!) The shower curtain is definately the frosting for the cake though- it makes your bathroom look so shabby chic (mostly chic) ;)