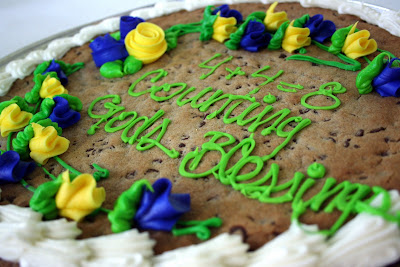 My parents are crazy people. CRAZY, I tell you. Always have been, always will. They married young-VERY young. Had babies young, VERY young. Struggled together, devoted themselves to one another, and just plain did things their own way. And it worked for them. It takes strong people to be crazy. It takes strong people to thrive while being different.

Growing up, as I remember it (and from the stories told), money was always tight, Dad always worked hard, and Mom was never without her children. Maybe it was bad. Maybe they stewed at nights worrying about money, but as I child, I never would have known. I knew only homemade playdough and Big Baby. I remember brothers falling into cactuses (Mom loves all manner of plants) and goat-butting, a cash register with REAL pennies in it for Christmas one year, and under-the-table tents. Maybe it was a hard life, but it was a happy one.

The youngest of four, I don't know the exact circumstances around my birth~through the years they've jumbled as the child-mind matured into a woman-mind~but I DO know that I was the last child they were able to have. As a child, inwardly I blamed myself for "ruining" Mom's chances. I don't know how true that was, only that Mom got very sick after I was born, was hospitalized, and eventually had a hysterectomy. My child-mind linked the two together. One thing I know for sure, is that growing up, Mom always pined for more children. It was a clear desire and an open one. Her openness, served only to solidify in my mind my OWN desire for children. I wanted to be Mom. What she loved, I wanted to love. What she did, THAT is what I deemed worth doing.

Through twists and turns and moves~ I grew into a junior high student, and Mom and Dad made the decision to do Foster care. It was the beginning of a whole NEW life for them. That was many years ago-and they STILL do Foster care, even today. Their nest never grew empty, because as their "first set" of children grew up and moved out, new little children sounded the halls and walls of the Cantrell home. The first little baby to come into their home straight from the hospital done them in. She was a sickly sort, bearing surgical scars as proof of her resilience. She lived and thrived in Mom's daily care, and each day drew Mom and Dad closer to their "Hannah Banana". Everyone knew that, should the option ever arise, Hannah would be theirs. Permanently. The day came and everyone rejoiced. I rejoiced along with the rest, though inwardly, I felt a special bit of thankfulness~feeling as though God had finally given to Mom what I had ended for her, what I had taken away. I didn't need to feel guilty anymore (I never had to in the first place, mind you, only I did because children do these things.) I could let that part go now.

Eventually, one adoption turned to two. Then two to three. With each subsequent adoption, Mom and Dad "claimed" to be done. Finished. "We have our baby now.", "We are getting too old, now, so this is it.", "I'm SERIOUS-this is the LAST adoption." The same remarks were given, but no one ever believed them. Everyone knew the truth. Eyes rolled, bellies rumbled with laughter-and it became the running joke of the family.

Their womb-babies grown, and some having children of their own, they began anew. Started family afresh. Their home is rambuncious, with not only the bobbing heads of adopted children, but those "on loan" through Foster care. They drive a 15 passenger van instead of a sporty car. They have doctors appointments instead of leisurely evenings alone. They go to Disney World instead of Venice. They have weddings and Christian school tuition on the horizon, instead of retirement plans. They have dance recitals for their OWN children to attend, not the grandkids. Their lives are MUCH different than those of their peers and everyone sees it, even themselves. But they thrive at being different. Aunts and Uncles are younger than nieces and nephews and the whole family tree is all whippy. It's all very confusing, to be sure, which is why I have alluded to this bit of family trivia here on the blog, but never taken the time to explain it.

Recently, the "joke" was made manifest again--in the adoption of ANOTHER child. Baby Lance.
He, too, was in Foster care, but my parents' is the only home he has ever known. Last month his adoption was made official by the government, and last Sabbath it was made evident by his Baptism. My parents stand, holding Lance, surrounded by the children that God planted in their lives~each one a new, ingrafted branch on the Cantrell tree. 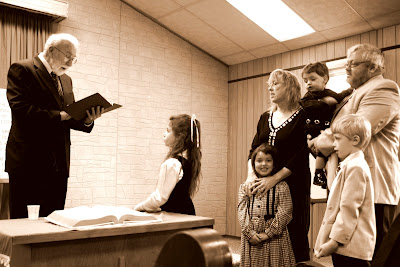 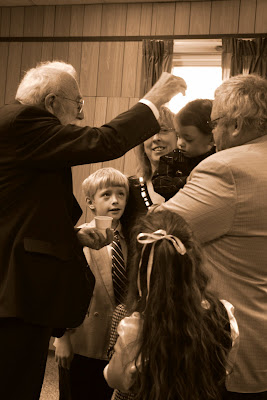 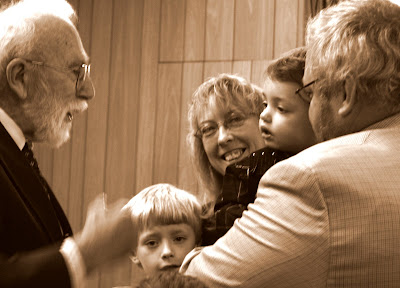 4 + 4 = 8
Counting God's blessings.
I don't know how many blessings are in their future, you know, they ARE crazy people. They INSIST this is the last one (but we KNOW how THAT goes...)
I do know this, it was a special day yesterday and we were glad to share it with them. 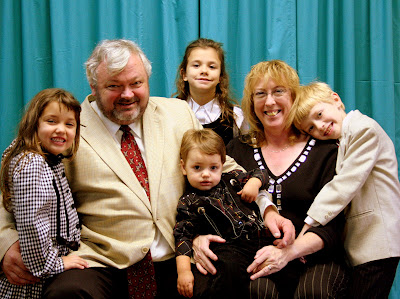 Your parents are very special people. Thanks for sharing their beautiful story.

Marvellous!!
Just so great to read the story, from which we have seen part....had to give your mum a ring!
BTW, asked her for your new address as well. You need to put up a new picture of the outside, because Matt has one of the unfinished house.
What about a lovely snow picture (to cover any rubbish if that is still around). You know, we've had snow already! Yes, in England, in October!!
Hope to see pictures of your new baby soon; all the best!!
Love, Els

I am one emotional pregnant woman! that made me tear up! :) What a sweet family thankyou for sharing.
~lindsey

Congratulations to your parents!!! I know what a long and often frustrating journey this has been for them, and I am overjoyed of this recent news. I only wish I could be there to hug them myself! :D

What a lovely tribute to your folks and the entire family. They are crazy, but it does work. We love them and you all dearly. Just wish we were all closer in miles, but you are all so very close in our hearts. Glad you could join them yesterday. What a reminder they are of what is truly important.

Crazy you say, but I say Emily's "Nannie" is without a doubt absolutely the best person in the world to leave her with when I can not be there. It makes me feel good knowing she is with such a loving and wonderful woman all day long. I wouldn't want it any other way. Of course since I am also pregnant I was a bit teary eyed and emotional reading about the love and respect you have for your parents in the choices they have made in their lives. I'm grateful to know them, and through them, to know you. Your mother taught you well and it is evidenced in the way your are raising your own children. Thanks for sharing her with me, for Emily's sake.