The Making of a Lasagna Garden: Part 3 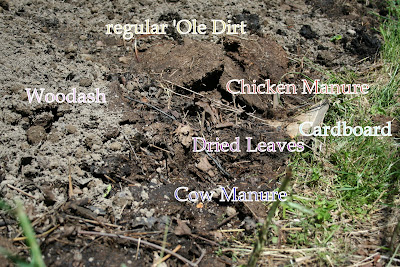 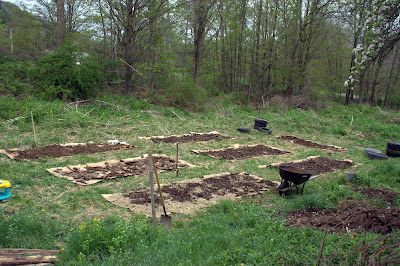 This is where the women are separated from the girls.

Oh, my aching back.

Your layers can be anything organic that you have available. Rotten leaves. Pine needles. Peat Moss. Compost. Our layers this year consisted of....

This is because, all of these we had readily available. Next year's garden will be on different layers because after the harvest, I will begin to build up the layers with fallen leaves and cut grasses. I only had a limited supply of those this year, it being spring and all. I also do not yet have a compost bin. 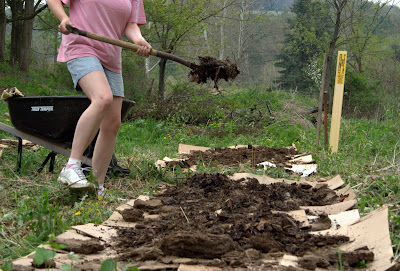 Each layer, built up with just a wheel barrel along with my own sweat and tears. I have decided, I hate my flopsy, rickety, rusty old wheel barrel. The thing nearly tipped hundreds of times.

I did get a reprieve when Matt began hauling in the manure. It is handy dandy to take up residence on an old farm. The manure pile was taller than ME (and that says a lot!) and proved QUITE handy for free soil. Because truth is, even DIRT costs a lot when you have to buy it! 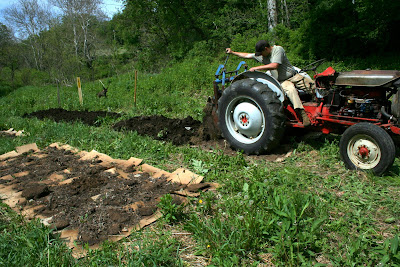 Matt hauled it from the barns to the garden and I smoothed and leveled it. Can I just say...Matt got the easy job? I've got to learn how to drive tractor one of these days....

Our little man is always quite the helper. He is Papa's shadow and wants to WORK. ALL the TIME. I love that about him. Even at three, the boy wants to be a man. He gave me quite a few rests while he did the spreading out. I guess I'll keep him! ;-) 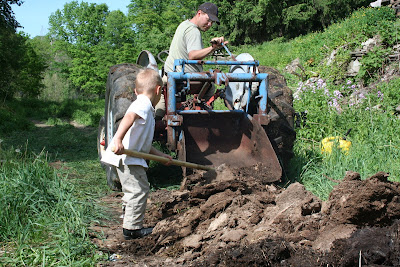 Corynn took this picture of me with my little strawberry papoose, working working working. Adele' had fallen asleep and has somehow settled into an awkward and haphazard position so it was shortly after this that I took her up to the house to rest APART from the comfort of my heaving back. 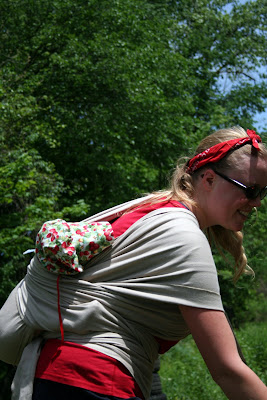 We did end up buying a truckload of dirt from a local place. I would highly recommend getting compost by the truckload and not by the bag. Perhaps you would have to borrow a truck, but the cost is cut in as much as a THIRD! We borrowed Matt's Dad's truck and Matt dumped the whole load in the corner. For ME.

The first day I did 21 loads of dirt. The pile hadn't even disappeared by half. I ended up forgetting about keeping track. Each shovel full, though, was a like a marathod sit-ups competition.

I get sore just thinking about it! 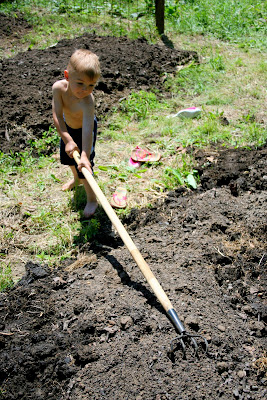 Of course, once it was hauled from the big pile to the garden bed, it then needed to be smoothed out. Also my job---except when the Panda came to offer help. 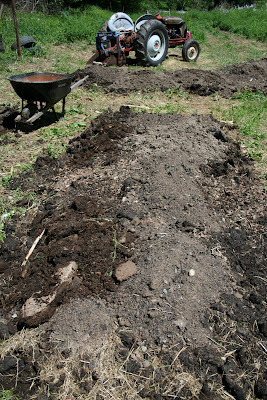 Well, next year, we are going with the OLD dirt guy and not the new one. Although, by then, the new dirt guy will be an old one....

And if you don't understand what I just said, that's ok. I don't think I did either. 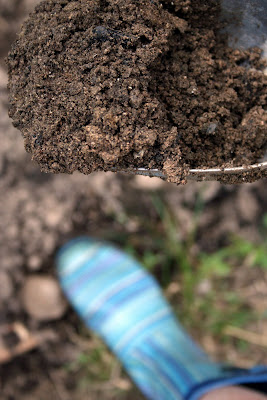 I used wood ash for the top layer (before planting), from our handy dandy woodstove this winter! 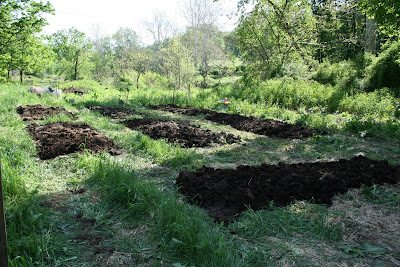 BUT. Still not ready to plant yet, Unless I just want to feed the seeds to the chickens and the plants to the deer...

Tomorrow comes the fence project. And what a project it was!
Posted by Rebecca at Monday, June 01, 2009

Ok, I am going to go take a nap after reading (and looking at all those photos!) all that had to be done.

I know when we had a garden, it was tough but rewarding work. Wishing you many blessings of truckloads of produce this year! :)

Wow! I've really enjoyed reading about this...is this process something you do every year? Can't wait to see you progress!
Amy

Oh, love the picture of your daughter in color...so neat!