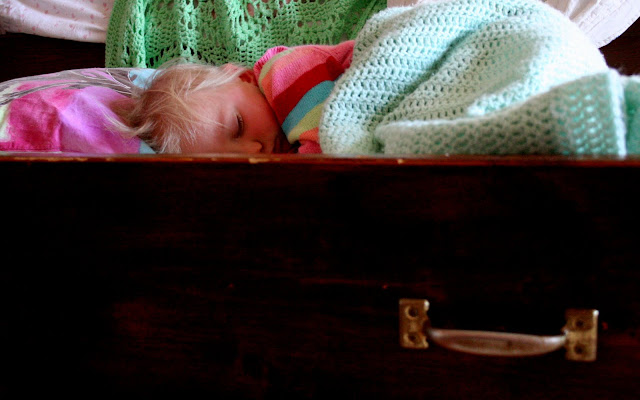 I moved Judah from the cradle in the baby nook by our bedroom into the crib in the childrens' room when it became clear that one false move and he would upturn the cradle upon himself.

This meant I had to kick Adele' out of the crib which she didn't mind too much. She got to sleep on an extra crib mattress in the "train drawer" of the bunkbeds. (the people who gave the beds to us used it for a train.) She reminded me of thumbelina when I would see her there.

It all worked smashingly well ( in fact rather like a party!) until Judah got a cough and would keep Corynn up all night who would in turn wake ME up to tell me that Judah was awake.

And then it went horribly, horribly wrong when Andrew got sick and puked over the side of his bed directly onto poor, unsuspecting Adele. The scene of Adele' covered in puke from head to foot and walking in circles completely at a loss of what to do and aghast at the grossness would actually have been sorta humorous if it hadn't of been so disgusting.

She is forever changed. As am I.

Not quite where to go from this point as far as sleeping arrangements. 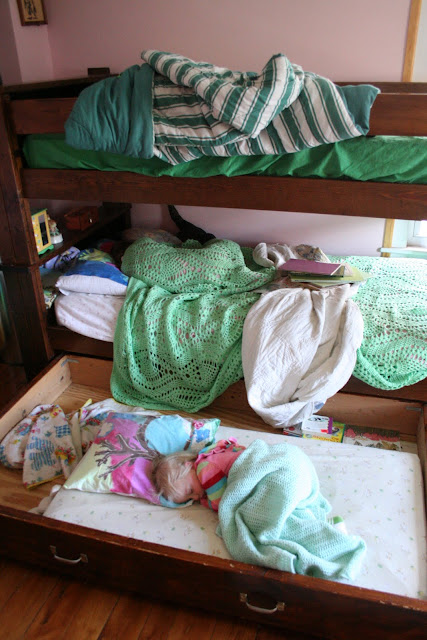 I will say, though, that the room is now happily void of that ugly green comforter (yes, I totally threw it out~along with two stuffed animals and a pillow.)
Posted by Rebecca at Wednesday, April 13, 2011

Oh. My. Yes, that would be rather humorous, not being the one who was covered, or had to clean it up.....
I have thrown pajamas away after those sorts of things. From diaper blow outs too. Sometimes they just aren't worth saving!

Do you have another room and you could put the younger 2 in one room and older two in the other?

Oh my! Poor Adele! And poor Andrew of course as well! :P I love those pillowcases...those are the ones you did with soap?? or wax??? or something! GLUE!!! It was blue glue! And I never could find the stuff! :)