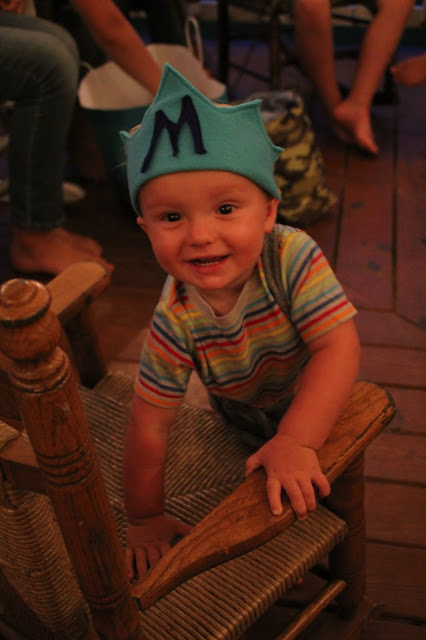 Oh my stars, I love this boy.  This year has been a rough one, on many levels, and I really sometimes feel like I actually COULDN'T have done it without this little person in my life, pushing me forward and through hard times, snuggling the pain and worry away, all while brightening the dark corners of my life.  He has no idea and will never know how much I needed him.

When I couldn't walk, he gave me reason to walk- so I did.

When I couldn't sit, he gave me reason to sit- so I did.

When I couldn't speak the deep, hidden things- he snuggled deeper and let me be silent.

When I couldn't find calm- he breathed his sleepy breathes on my chest and gave me his.

What a glorious gift he is to me. 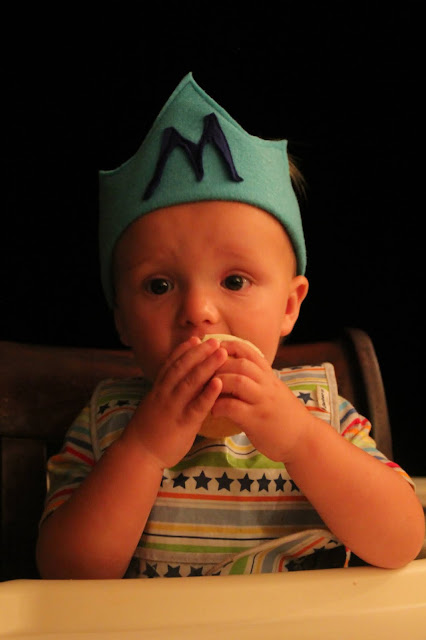 How's this for returning the favor?

The poor boy had his very first birthday cake be a tiny cupcake with leftover frosting from Judah's cake. 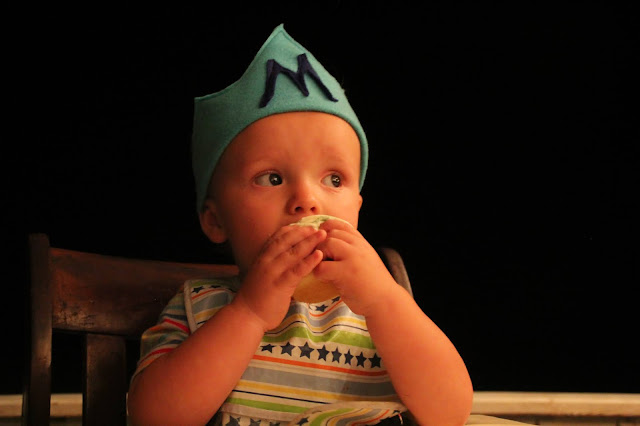 The worst part was, with two other children blowing out the candles, I missed seeing Moses "blow" out the candle- which apparently, he actually BLEW. 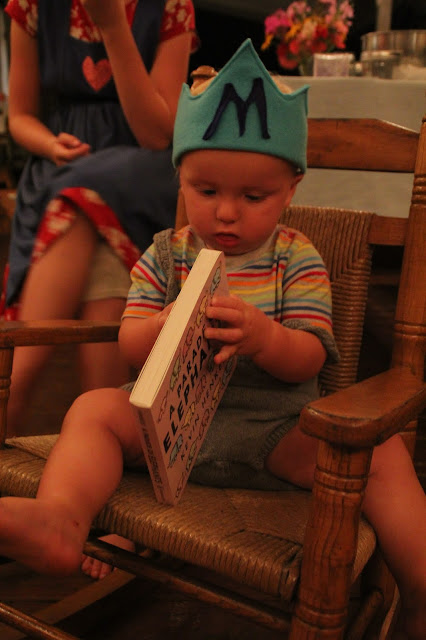 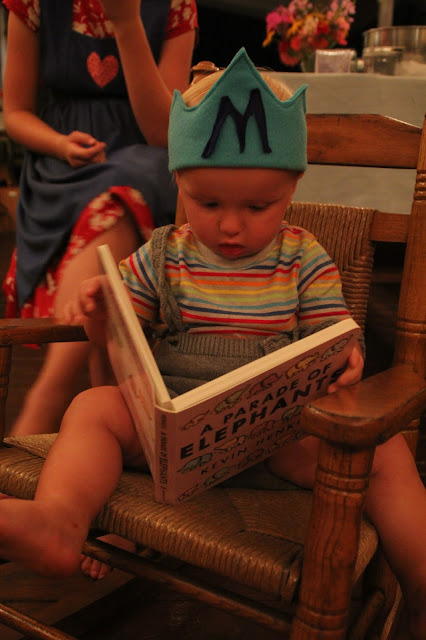 For his birthday gift, I made him a camel to sit and bounce on.  I don't know why....it isn't like I know how to make large stuffed animals or anything.

When Adele' was a baby, I saw this picture and loved it.  I was determined to make the camel for her.  A-hem. And then didn't.  The same was true with Judah.  And Ineke.  I guess it was meant for Moses.

I *WISHED* I had a video of the first time he saw and used it- his reaction was the BEST and made it all worthwhile. 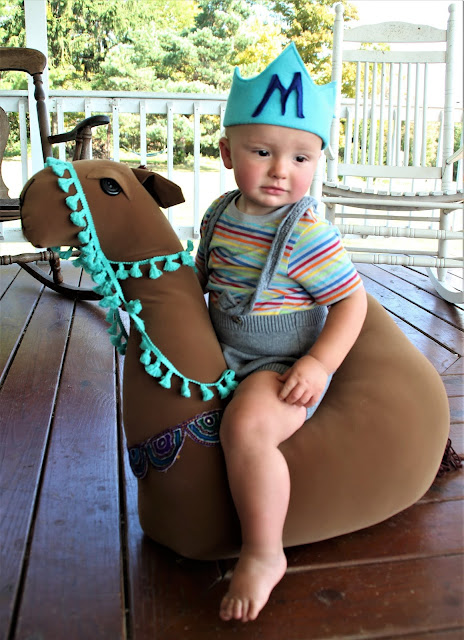 I totally made up the pattern- hoping that it would work out in the end.  I had no idea what I was doing.  I made quite a few mistakes that I wish I didn't- the neck wasn't stuffed nearly enough and is bendy.  And for some reason, it tips to one side all the time. 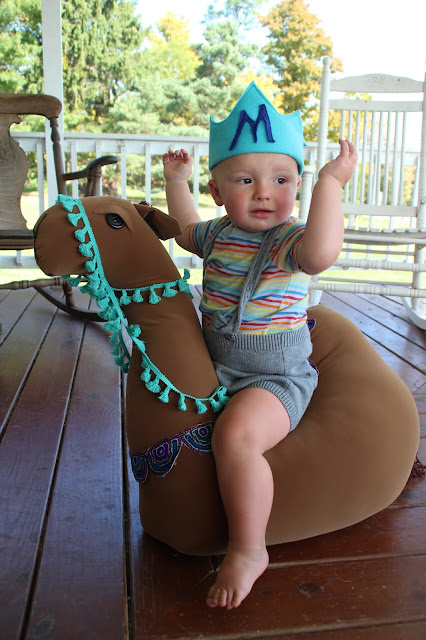 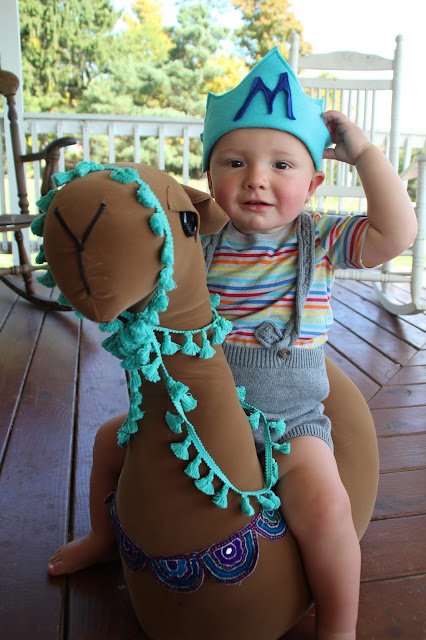 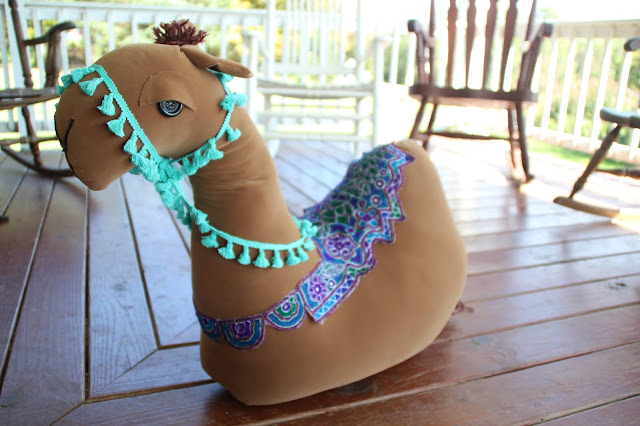 Rebecca Joy, recognize anything?  I used that fabric you sent along for me once upon a time!  It was perfect- thank you! 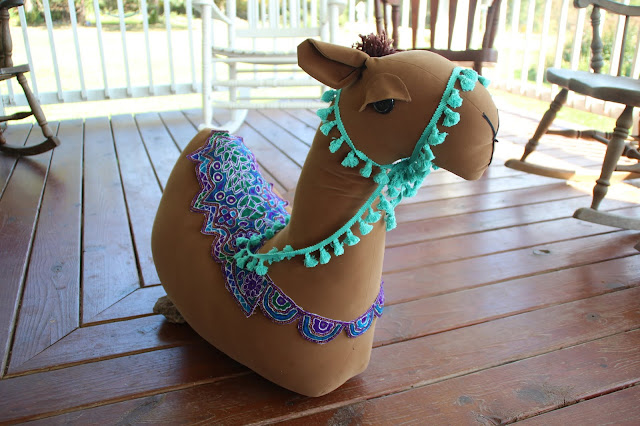 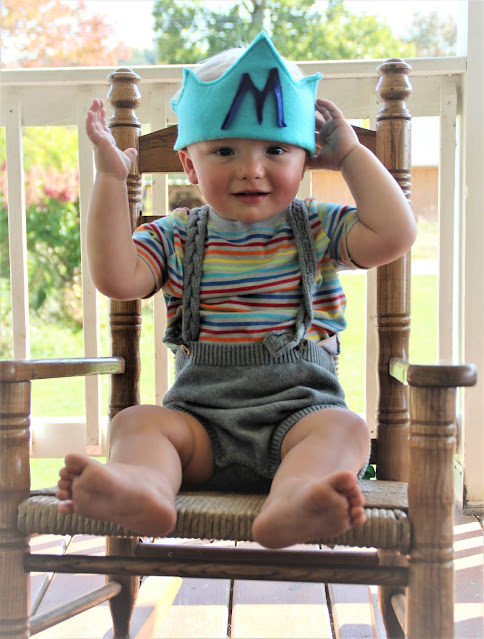 Let me tell you a bit about Mister Moses that pictures don't:

When he was mere minutes old, his eyes were wide open and he would already turn his head to me as I spoke to him.  NONE of my babies were ever that attentive.  I couldn't believe it.

When he was VERY small, like a few months old, I would put his flattened hand on his cheek and say "Moses" and then put that sweet little fat hand on my own and say "Mama".  I did it because I wanted to teach him names.  And also because it made him smile. Even now, when we are saying names, he puts his flat hand on peoples' cheeks and grins.

He only says "Mama", even now at 14 months, and it makes me kinda feel like I am his whole world. (Shhh- don't tell.)

He did just start whispering "woooooowwww" when something is neat or new.  I love that it is always in whisper form.  And actually, he has been saying a form of 'ahhh-men' for quite a while too, now that I think about it.

He knows when we pray and already expects it before meals.

He signs words like please, thank you, more, all-done and NO.  He signs NO to me all the time when he knows he isn't supposed to do something- and is doing it anyway.

Moses took his first steps when he had JUST turned 10 months old- and was walking like a pro in a week or two.

He most recently began climbing on pianos, tables, chairs and up the stairs.

He loves being outside probably more than any other thing.

He screams a horrible squeal right now that I am trying to break him of and when he is mad he will bang his head on furniture or the floor.  Sometimes he startles himself with his own naughtiness.

This scream most often happens when he tries to squeak out an open door and I catch him before he escapes.

He is magnetically attracted to the toilet bowl water.

He is also magnetically attracted to danger.  In one week, he got a goose-egg on his forehead, ran into the road with on-coming traffic, exploded a firecracker in his mouth, tried to eat a dishwasher pod and nearly made it out the window onto our porch roof.  And YES, I *DO* watch him every minute.  It's the seconds that are the problem.

He has the CUTEST, dopiest look on his face sometimes.  Seriously adorable.

He doesn't ever snuggle anymore unless I am nursing him- and sadly, I have very little milk at this point... the other day he got done one side and signed to me that the milk was 'all gone' on that side.  It was hilarious.

He has several different little songs I made up for him, but sometimes his name is so musical, it comes out in song.  Every time he hears that 'Mister Moses" song, he starts dancing.

He loves 'helping Papa' with washing the milking equipment by handing up the tiniest piece of the machine.  Same piece, same time, every morning.

Cherry tomatoes were his favorite food all summer- and now that we got several bushels of apples, he has turned to apples.

He is my insufferably sweet  Little Mister and I can't wait to see what this new year brings with it! 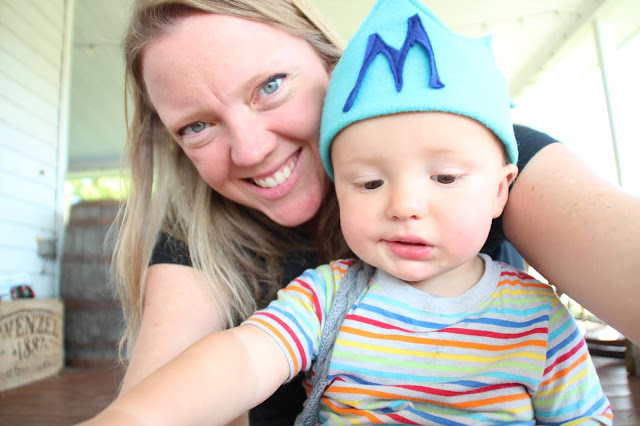 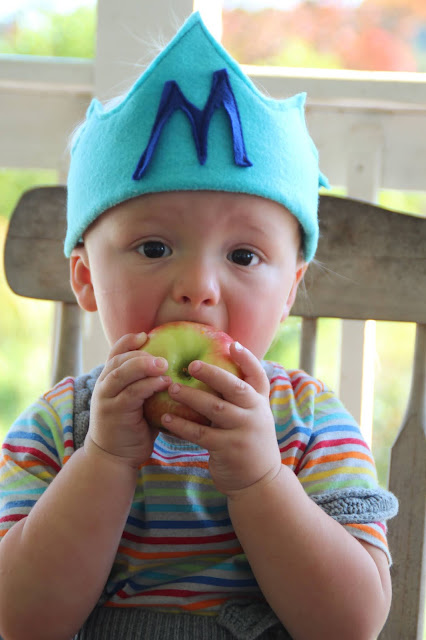 Check out the video on my Instagram of him being all cute and sleepy.

If that doesn't melt you into a puddle, you must be a cold-hearted scoundrel.

Happy belated birthday, Moses!
Love the pictures and stories. He's a sweet gentle man in the making. He will bless many.

I am so happy you have Moses in your family. He sounds so adorable, I wish we could pat each other's cheek as we name each other. Happy Birthday cutie Moses.

Look how big he is! I haven't commented in awhile but I've still be reading! I'm glad y'all are doing well. ❤️

I LOVE what you did with the camel. I am impressed with your vision (that is never what I saw when I looked at that fabric!) and your implementation. I shared with Hannah, who brought the fabric home from Pakistan, and she also loved your creative use. Well done!!