Uncle Paul came out to visit this past weekend and chugging along behind him was a truckload of boxes for me to go through. As we have gotten to know one another on a more personal level, he has found out that I can and I sew and that I garden and this and that. He says I remind him very much of Nancy and he asked if he could bring "some" of her things.

What I did NOT expect was that it would be an entire TRUCKload!

Many things were boxed that are easier for someone less-emotionally attached to discard, like old magazines and old cookbook pamplets, easter baskets and such.

But some things were over-the-top amazing.

He brought me her canning jars (yay!) and lids and even a CANNER. He brought me a stockpot and some original Ball Blue Books. He brought a few baby outfits that Nancy had set aside as gifts for people (both boy and girl). He brought the children a handmade rocking horse that has been in the family.

And, after their children had gotten what they wanted of it all, he packed up Nancy's sewing room into boxes and plunked it down in my house.

I spent an entire evening going through those boxes and I can't recall the last time I had so much fun. I felt like a little girl, going through her mothers' sewing basket, except the "basket" was actually several cardboard boxes and the "little girl" was all grown up. (I will say there were plenty of little ones circled round, oohing and aahhing right alongside their mother.)

As I would unlatch a box or lift up a lid, I became more and more certain that it wasn't just the hugging and the kissing that made Nancy and I kindred spirits.

Is it me or can you actually "see" the beauty of another when you admire their things?

I would look at the spools of thread and saw her mending away. I saw knitting needles and practically heard their clinks. I fingered the fabric and wondered what she might have been planning to use it for. I dove my hand into her enviable button bin and could see the little hands of her children, around her feet, sorting and playing, those many years ago.

Such beauty, I thought I would share some of it... 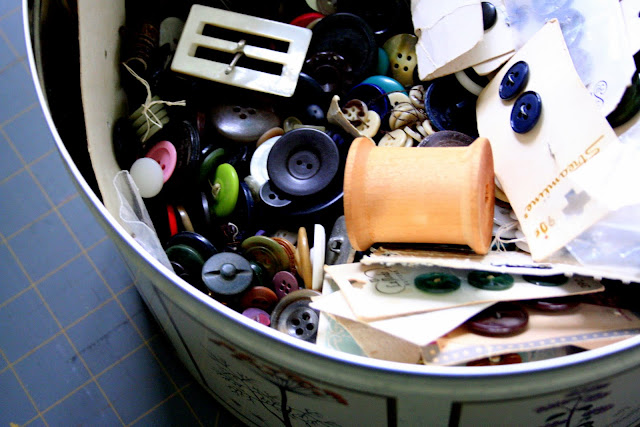 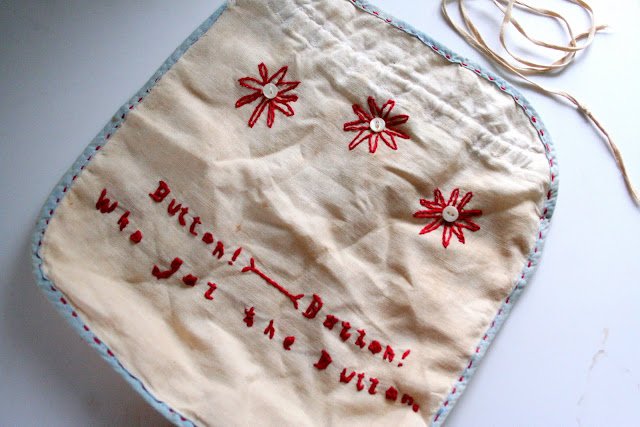 ~what looks to be an older-than-dirt button bag. Too old to be called "vintage"... "antique"seems much better suited~ 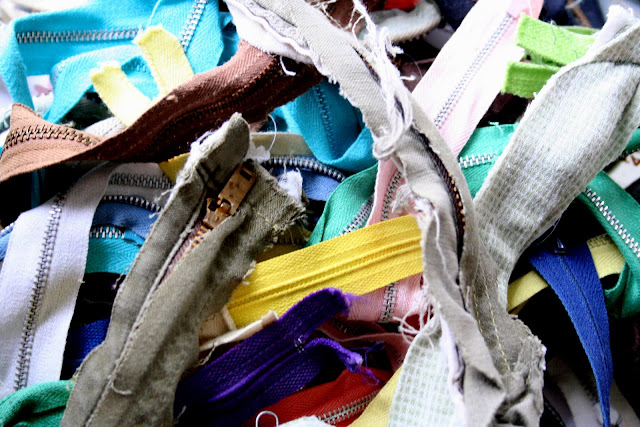 ~zippers, an entire bag full. Many, cut directly out of fabric. I guess I have a thing or two to learn about frugal, waste-not ways after all!~ 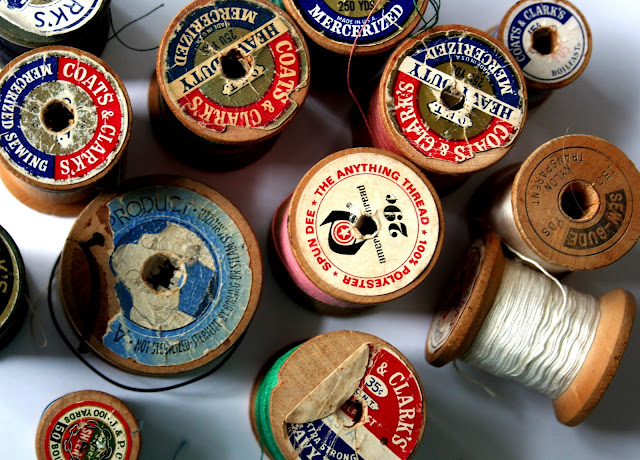 ~thread. A whole LOT of it. But SOME with wooden spools! (be still my heart!)~ 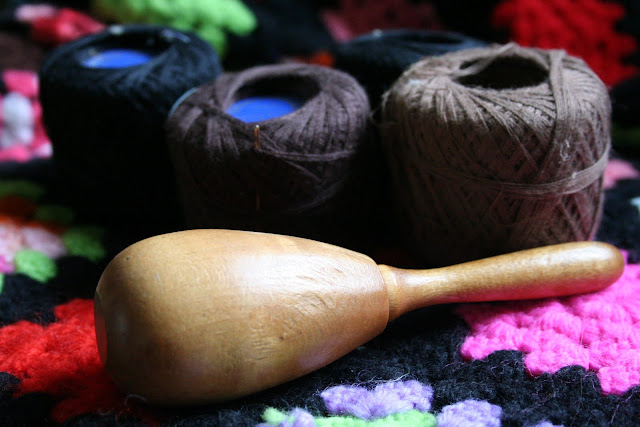 ~darning equipment, in the same baby wipes container as the Fun Fur~ 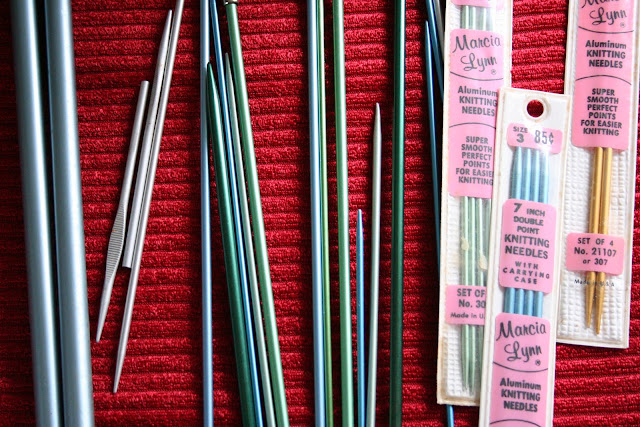 ~taunting knitting needles. WHY, oh WHY, can't I get the hang of it?!~ 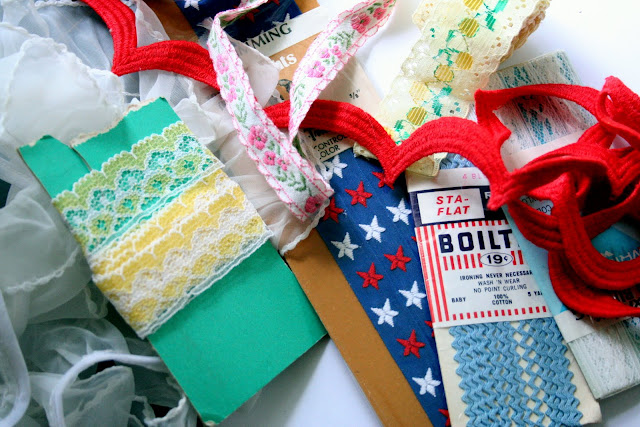 ~trims, lace, ric rac, bias tape. I love the lemon one. It might be my favorite. Or maybe the red one below~ 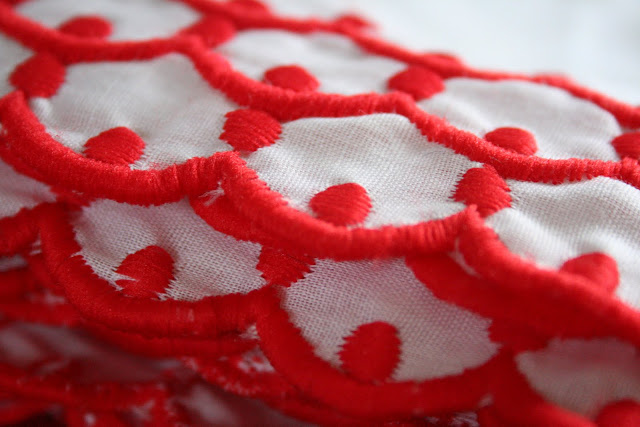 I am afraid my sewing room is destined to be cluttered. I just went through it all this winter, sorting, packing, giving away and selling stuff. Only to have this wonderfully thoughtful generosity poured down upon it. I am not complaining...

There was also sewing scissors, a strawberry pincushion and several other necessities of a working sewing room which, sadly, I already had.

I have been planning on making a sewing basket of her very own for my girl for her birthday in September. I remember the year my mother bought me my sewing basket. (I use it to this day!) It was undoubtedly my favorite gift growing up. I remember reverently touching the REAL sewing scissors, that were too big for my hand. I remember rolling and rerolling the measuring tape and admiring the seam ripper and fabric pencils. I remember wondering what exactly the metal ruler thing was with the red plastic bit in the middle. ;-)

I think a sewing basket might cause the same sweet memories for my Corynn, given her early infatuation with sewing.

Now I have a headstart on the basket stocking, thanks to Aunt Nancy.

Slobber -slobber- drool- drool. A screaming Muffin isn't giving me a chance to read, but the pictures will tide me over for now!

Okay, I finally got to read it, and I am JEALOUS!!!!
All those wonderful goodies!
I think a sewing basket for Corynn is a great idea, I got my first one at the age of 5, and while only the box itself is still in existence, I loved it dearly.
That is all *good* sewing room clutter.

What a wonderful blessing!!! Uncle Paul sounds like such a dear man and I'm sure it does his heart good to pass on his lovely wife's belongings to another who will cherish them and put them to good use! (Most women today would just pass over it all as "junk!")

I have inherited a few button tins over the years...and while it's fun to open that box and admire the bits inside...I got so tired of looking for "5 of these" or "7 of those". So, I have been letting Camryn string them on crochet cotton for me. I sort them out into piles, thread her a long needle, and instruct her to "put all the same ones together," and she strings them for me. I just have to snip the thread between each group and tie them off. Then I put them all into mason jars by color and store them that way. Saves a lot of time when I'm trying to finish a garment and need just the right button.

And she has a blast...she often asks me if she "can string buttons, Mom?" Maybe Corynn would enjoy doing that, too?

Loved your previous post about writing to your aunt. What a testimony to how such simple acts of kindness can impact someone's life.

I did want to say I might be leery of using the thread, though. (Any thread priced at 29 cents had been around a long time!) It can deteriorate over time...would look great on display, though!

I think that is what we all hope (those of us with sewing rooms) that someday, even if it is not our own children, someone will appreciate our stuff as we did. She would be thrilled. Keep those wooden spools! Thanks for your blog by the way, you make a big difference in people's lives. Rest and nurture yourself now.
Cheers.

What a wonderful blessing!

How incredibly sweet! When we were given old thread long ago some was left on the spools as decorations and some was used as a fine embroidery floss. I did use some to sew with but regretted it (kept breaking...)

I know someone will love "it" as much as you did! How truly exciting and what a wonderful blessing!!

Toodles... back to working on the house. The living room, dining room, kitchen, and our bedroom will be done as of today!! (aside from pictures on the walls but that is okay!!) My in-laws will get in tomorrow and Chris gets home tonight so I am trying hard to have accomplished much this past week!!