I always like to take a few (har, har) photos of the birthday child for remembrances' sake.

This year, however, it didn't end up happening on his birthday...in fact, it finally happened justYESTERDAY (which is why I posted about Easter before his birthday even though they didn't happen in that order).

Maybe I should have dressed him up like you would if you were going to a professional place, but overalls and barefeet just seem to sum up the boy these days. He is still very much into cowboy boots, but now that the weather is nicer he really enjoys barefeet. He still refuses to wear shorts, though, because cowboys just don't DO that...even in warm weather.

So here he is. My boy. Papa's boy. Our boy together. The FOUR year old. 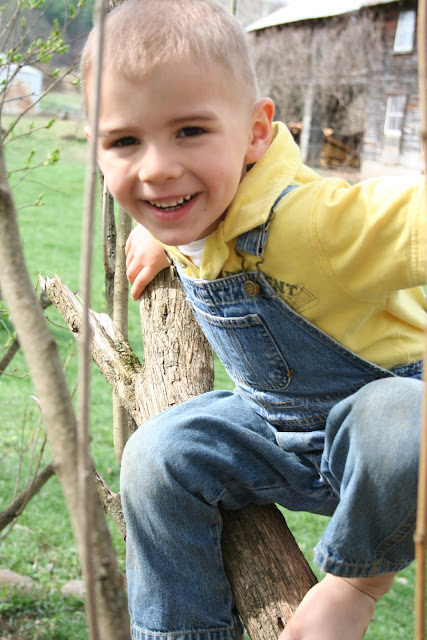 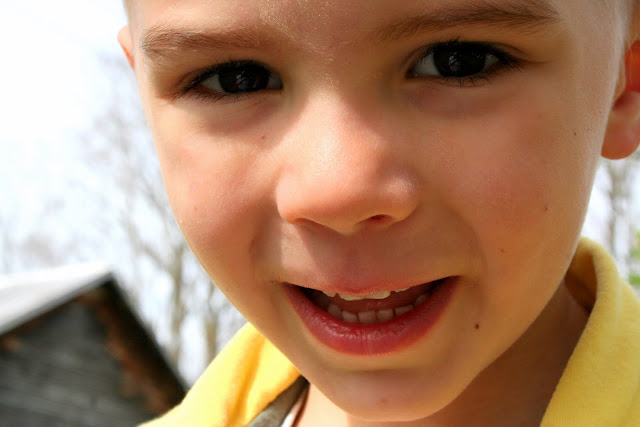 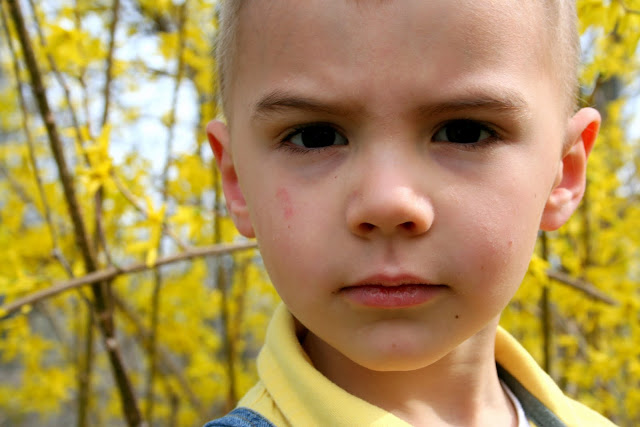 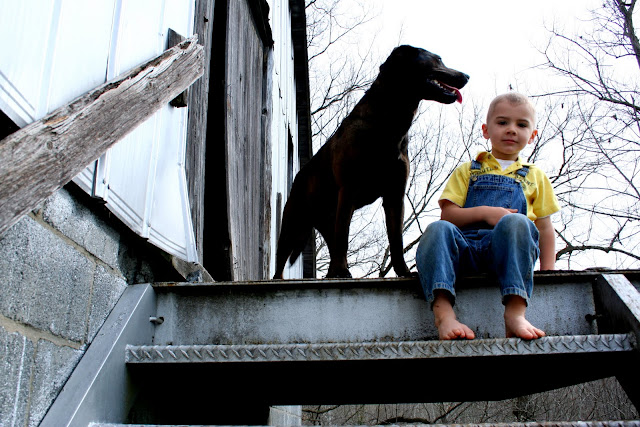 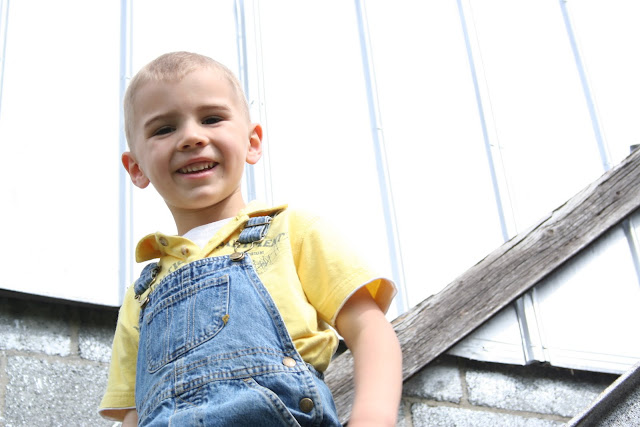 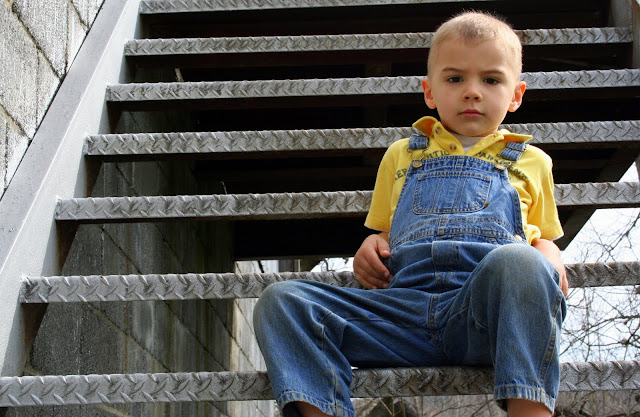 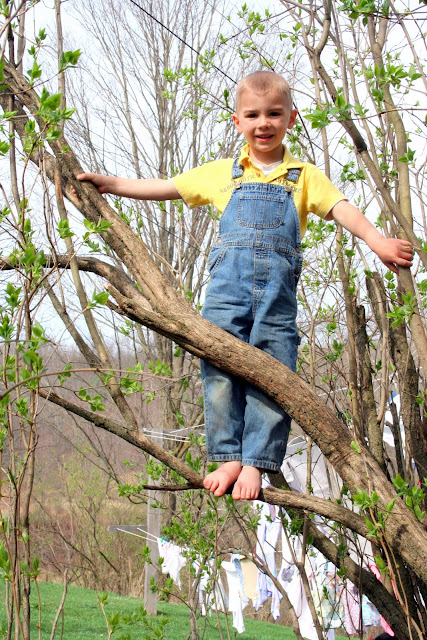 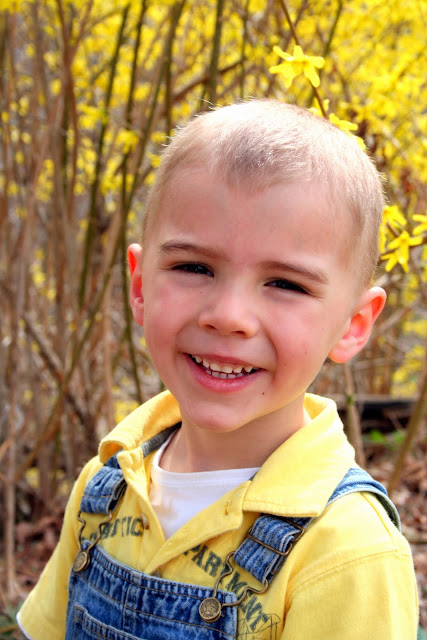 I love all these pictures because they capture so many of his expressions. His serious side. His charming side. His sweet side. His brow furrowing and empty stare. 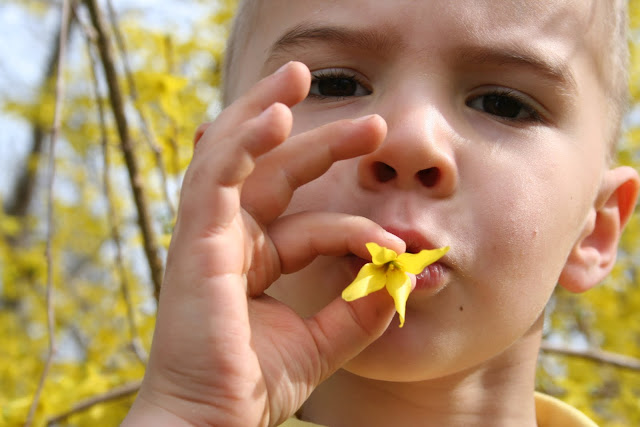 ...TRYING not to wonder what he is doing. Trying very HARD not to laugh at what he LOOKS like he is doing.

I love this boy. I am so glad that he is ours.

CHICKEN NUGGETS and FRENCH FRIES with ketchup and YOGURT.

That is the easiest, weirdest, and most bizarre birthday FEAST I have prepared. I made sure to get 100% chicken ones though, because otherwise it would be just....gross. SCORE! They were DINOSAUR shaped! (That fact alone is kinda freaky, isn't it?!)

We ate them and then it occurred to me how absolutely unfilling those things are. I could have eaten the whole bag and still not felt satiated. I didn't.

His birthday CAKE description kept getting more and more elaborate as the days grew closer to his birthday.

Finally, I had to put a nilch on his suggestions when he said he wanted earthworms UNDER the dirt. (?!?!?) He wanted:

a cake with sprinkles in it, with green frosting for grass and brown frosting for dirt with stones and a rattlesnake. A cowboy was initially going to be shooting the rattlesnake but Andrew eventually changed his mind to a cowboy on his horse that was roping a calf.

I was envisioning fondant rattlesnakes and playmobil cowboys with a black licorice lasso when I discovered these amazing cowboy figurines at target. On a horse. Smack dab in the middle of roping!! (How perfect is that I say?!?) WAY better than black licorice. 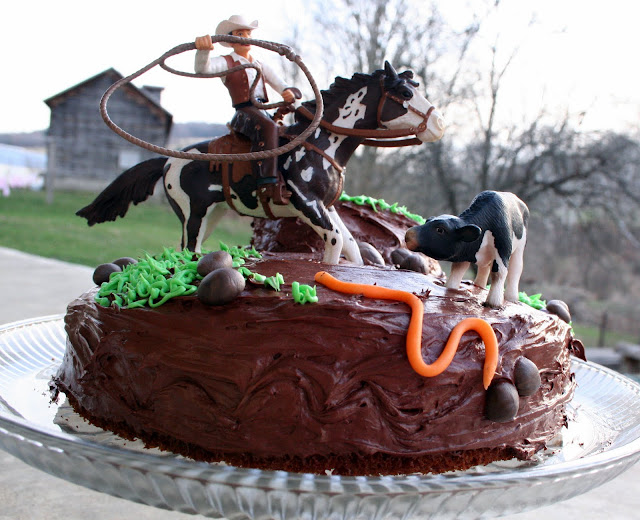 I love the expression of the calf... 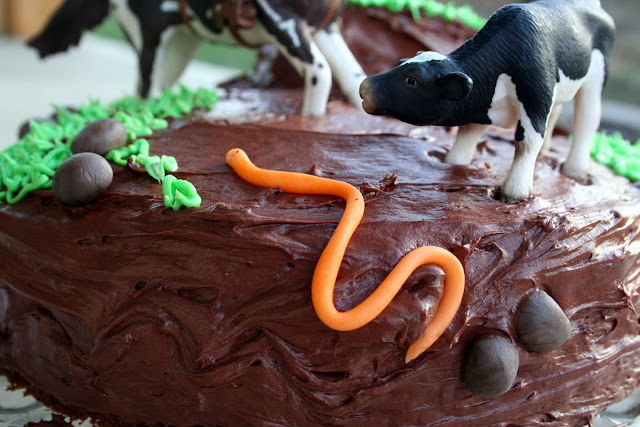 I imagine the horse had a similar expression, being as knee deep in MUD as he was... 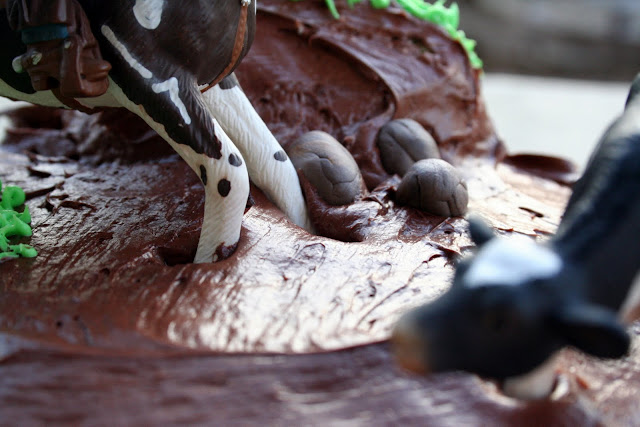 The toys were a bit pricey but I figured they counted as a gift (and sure enough he loves 'em as much!)

I used an upturn cupcake to make the little grassy knoll and fondant to make the stones and snake. 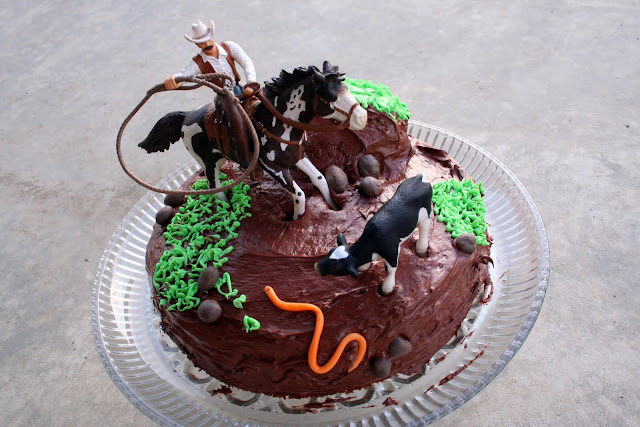 I put his four candles on the grassy knoll and pushed them all the way down to look like a bonfire.

Instead, it just looks like he is turning ONE. ;-) 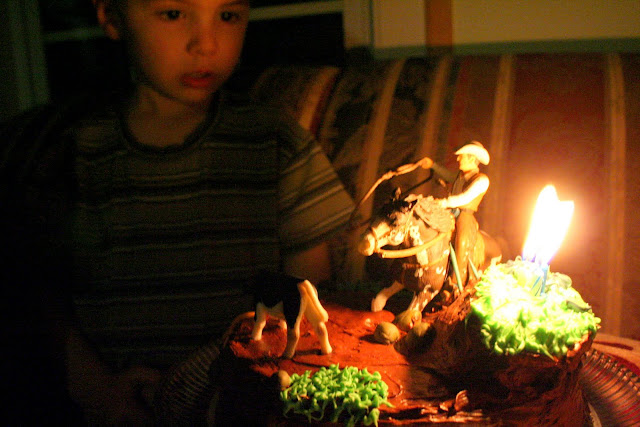 I can't believe you were able to make his DREAM CAKE a REALITY. Good job sweet mama!

Love the photos of him on the steps and in the tree. Cute boy and great photography!

Congratulations. You are obviously doing a great job with him.

Great lunchtime reading and looking! (esp. because I splurged on a yummy sounding hot pocket (trying to satiate an undefined craving), that is not so yummy tasting, and I think I now have a 3rd degree burn on my thumb from)
I can't believe how big he is! 4! He was still just a baby (7 mos.?) when I started reading your blog. I love what a boy he is, and his milk house! How cute!
The cake is fantastic, I laughed about the worms under the dirt- only a boy!

I mostly agree with your soapbox, except we have lots of dolls and little cars, they all get played with though, and the ones that don't get passed along.

My cheapness is why my children often have homemade gifts. I HATE shopping in the toy section. I couldn't agree with you more there.
Anyway, off I must go to put away groceries and tend to my throbbing thumb. Don't try the Mediterranean hot pocket (I should have known, the whole 2 other times in the last 10+ years that I have had Hot Pockets, I didn't like them...), even if it sounds good for some reason. It ain't worth it.

Very cute pictures! My little boy is 7 and he is the same way. Always in overalls or jeans. No shorts, usually. :)

The cake gets a thumbs up! I love it!

LOVE LOVE LOVE the pics with the forsythia in the background. They match his yellow shirt so well! I loved all of your pics of Andrew but I must say those were my favorites :)

Okay, I laughed out loud when I read those were stones. I thought you went realistic and made cow patties!!! ROFLOL

Great job, as usual on the cake!

Great cake, Mama, (as usual). Great pics, too. But how could you go wrong with such a great lookin' lil' cowboy?

Sounds EXACTLY like a cake a certain 5 year old of mine would LOVE! :) Love the photos, especially of the one on sitting on the steps with him to the right! Awesome! :)

Ok, my two year old requested a shark cake! :) :P Thank goodness his birthday isn't until July so I have a few months to figure it out! :)

Wow such an amazing cake! So far all I've ever made my kids for their birthday's is a heart shaped banana cake...every birthday...every year...I feel a little ashamed now. ;)