The Gifts, a soapbox 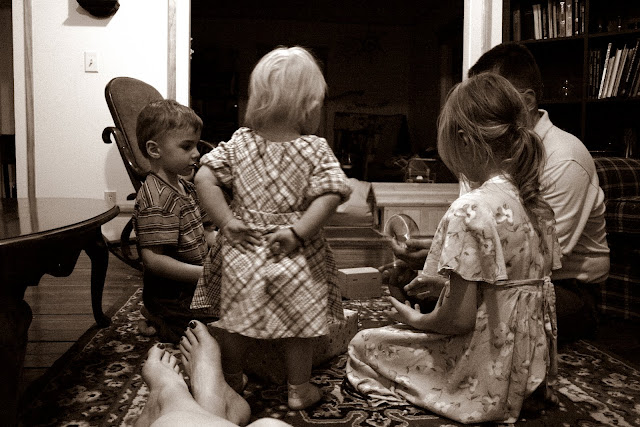 I need to rant a bit, so this deserves its own post....

I learned several very important lessons when looking for a gift for my birthday Panda.

First: a few things you must know.

1) I am cheap. I buy most of our stuff at yardsales or post-holiday clearances and set it aside for "someday". I would rather store great stuff when I find it reasonably priced than feel like I have to spend store cost on something "okay." I never spend the money on the "great" stuff out of catalogs because they are never ON post-holiday clearances, even though I love them so much.

2) I don't believe in having 20 dolls, or 20 trucks, or 20 stuffed animals. Call me a minimalist, but a doll (or two) should suffice. Same with trucks, cars and every other manner of toy. Anything more than that is not only unnecessary but clutters your home AND your mind. Less is MORE with us.

3) From day one of parenting, we have always only given one or two gifts on holidays. Practically speaking: we don't know how many children we will end up with and we want to be able to afford celebrations without our children having to "cut back". Better for us to exceed their expectations from day one than to cut them back "someday". But more than that, we want our children to be grateful, not greedy.

OK. All that background knowledge is shared. I can go on with my story.

I had planned to sew Andrew some chaps (since he is all cowboy) and make him a HOBBY HORSE and maybe even get him a rubberband gun or something. It was clear though, the week before Andrews birthday, that I wouldn't have time to make him any of the gifts I had hoped to and I didn't have an opportunity to shop for him until the day BEFORE his birthday. I had no idea what to get him but I wasn't about to settle on something dumb, or something he already had, or something chinsy. I went shopping for four hours while Matt put the children to bed.

And I came home EMPTY handed.

Because I left after Matt got home from work (late) and after dinner was made, and because we live a million miles away from an actual store, I had only two hours before most stores were closing.

I love Target so I opted to go there first, instead of TOYS R US. (I have only been to a TOYS R US twice in my life but I think the sheer volume of toys inside might have made it a better choice?? It would have added 20 minutes to my trip so I opted for the closer option.) I spent two hours perusing every aisle imaginable. Even the camping aisle. And seriously-it was all just....room fillers! PLastic EVERYWHERE. Awful robotic weird stuff EVERYWHERE. Battery operated EVERYTHING (oh yeah-we aren't big battery operated people either).

By this time it was nearly 9:00 and I was desperate. Tomorrow was his birthday and I had NOTHING. I went to Walmart because that was the only place that would still be open by the time I got there.

It was exactly the same. Junk. Evilness. Weirdness. Unproductive money-wasters.

I cried on the way home and through my tears I had a few realizations.

1) Being cheap is not always a good thing. Always looking for a good deal is a good thing but only spending money on deals can sometimes get you into trouble.

It is never a good deal to spend your money (no matter how little) on junk. (Junk is a relative term and so you define JUNK for yourselves, just don't spend money on it.)

Those truly quality, mind stretching, amazingly wonderful childrens' things in catalogs like VISION FORUM and HEARTHSONG (you know those things I never buy...) may be more than yard sale prices and maybe they hardly ever go on clearance and maybe you DO have to pay shipping on top of everything else, but sometimes it is WORTH it to buy quality, life-ENHANCING items. In a very real way, investing in worthwhile, life-enhancing things is a way to invest in YOURSELF (or your children) and there is no better way to spend your money.
I need to stop being so stingy on things that are worthwhile.

2) I am SO thankful for my boxes of "gifts in waiting" from post-clearances/yard sales. Thinking about gifting throughout the year can save you so much money rather than waiting to shop around holidays and pay full price. I had a slinky and a playmobil ship I was able to scrounge up for his gifts. I also had a vintage tin marble game (very cool!) set aside that I gave to him. Had I not had these things in our attic, I would have HAD to buy full price items that I didn't like, just so I could give him SOMETHING. phoey. It can also, incidentally, help you avoid stress from a desperate four-hour, birthday-eve shopping excusion.

3) I am SO SO SO thankful that our children have been encouraged to be thankful for one or two small things instead of constantly having to outdo ourselves each year lest they be disappointed. Exceeding SMALL expectations is always happier than not meeting LARGE expectations. He was incredibly happy with his "little things" and never felt "gypped" or disappointed, not even in the slightest. (Even though I felt it for him... hehe)

I think I have learned my lesson.
Posted by Rebecca at Thursday, April 08, 2010

I feel the exact same way about EVERYTHING you wrote. I have so many times actually bought my kids junk out of being desperate....only to sell it in a yardsale later because it wasn't quality. I've started just saving to buy them one nice gift for Christmas - since the LOVELY toys seem to never be on sale. And then I'm beginning MAKING stuff too - so much more fun.

I feel the same. I hate it when I wait until the last moment though and can't come up with something worth while to give. My children live in a daycare because I run one in my home so they are surrounded with toys and I do not feel the need to be constantly buying them more. They have more then enough as it is. I want them to appriciate what they have and to care more about giving then receiving.